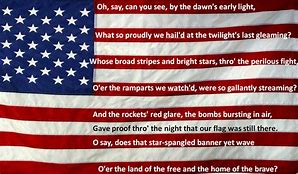 Is it because it’s election time again for 170 Nexstar stations to believe in patriotism again?!   Time will tell.  It wouldn’t be a bad idea to air the Pledge of Allegiance after the Star-Spangled Banner.
August 30, 2019    By Mike Brest, Washington Examiner
Over 170 television stations will start playing the Star-Spangled Banner at the beginning of their daily broadcasts.  Nexstar Media Group announced on Thursday a partnership with Broadcast Music Inc. and Belmont University’s Mike Curb College of Entertainment and Music Business to air the national anthem, which will be performed by different emerging singers.

The singing of the anthem across Nexstar’s 171 stations in 100 markets will begin on Labor Day, Sept. 2.   More…